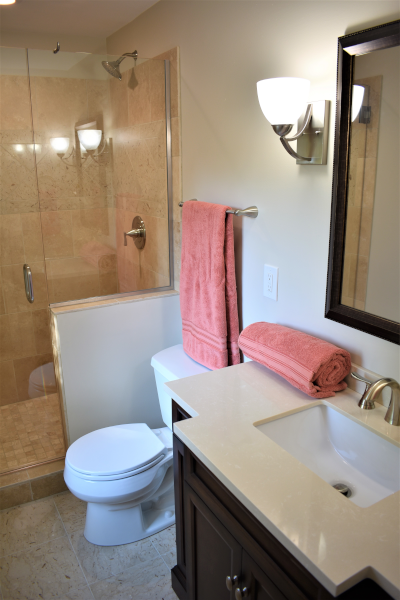 When we first met with the customers, they wanted to turn their “dungeon” of their bathroom into a higher end space that could win awards for its transformation and be able to show their family and friends how functional of a room it could become, while with a bit of bragging in there.

When we first started renovating the bathroom, we tore out their shower, nicknamed “the tomb” by the homeowners. We found a four-inch concrete base encased in 1/8-inch-thick lead, making for a very interesting removal.

After the demolition stage of the bathroom, we discovered that the original cast iron ventilation stack was broken, causing unsafe conditions in the house with sewer gas and a major leak that could not be pinpointed before. The homeowners were very glad to take care of the situation that has haunted them for a while.

After working with the homeowners and deciding what their wants and needs were on the bathroom, we decided to remove the door that went to the guest bedroom to improve the functionality of the room and create a true master bathroom. In turning a jack and jill bathroom into a master suite, we were able to create more space, a higher functioning room for the shower, and a shower big enough for them to actually turn around in.

The homeowners wanted a brighten space to be able to compliant the travertine shower they always dreamed of. They achieve this through the light colors of the walls and accent pieces including the bright speckled marble floor, and a quartz top with a undermount sink. To contrast the room, the travertine tile shower and the high end cherry vanity balanced the tones of the room while keeping it warm and bright.

The end result created the master bathroom of their dreams, while sticking to their budget. Instead of it being a tight Jack and Jill bathroom, it is now a fully functioning master bathroom they enjoy being in and showing their friends and family what the old “dungeon” turned into.