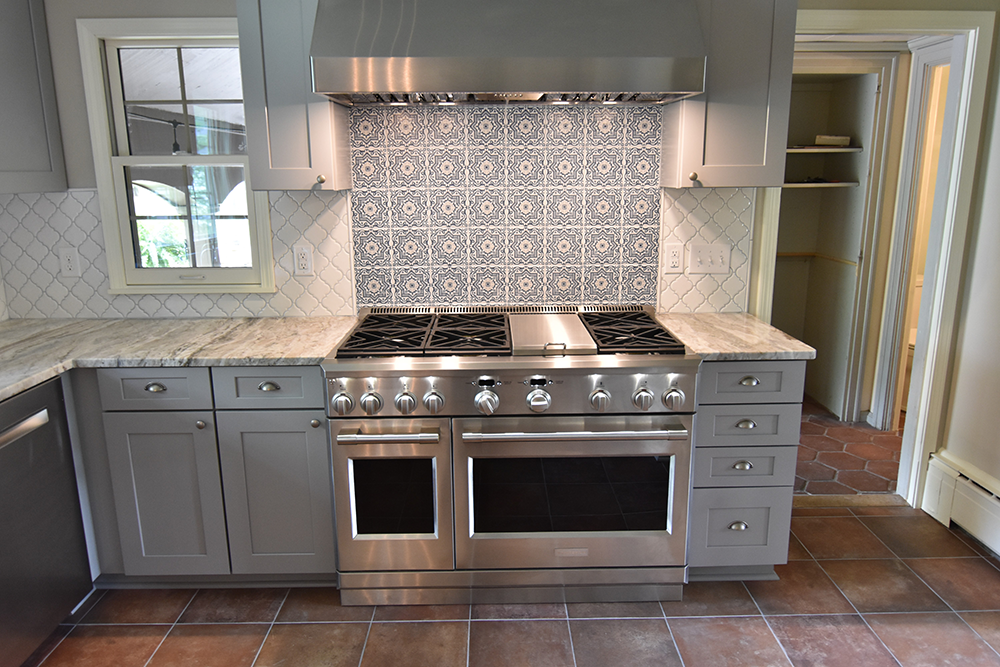 When meeting with our repeat clients to talk about their dated 1970’s kitchen, they were originally worried with the overall cramped and small appearance. They desired more cabinet space with a better, open floor plan to accommodate their family needs. We first started by removing the decorative beams installed in the 1970’s renovation. Upon further inspection, it was discovered that the ceiling was furred down to mask the water lines and electrical below the ceiling joist, along with a beam that was load bearing. The water lines and electrical were relocated into the joist, along with the load bearing beam that was recessed into the existing structure to raise the ceiling. When the ceiling was addressed, it was then discovered while removing the floor that there was a 2 ½ inch thick layer concrete base that was laid in the kitchen, which was removed and resolved a lingering question of why the kitchen floor was significantly higher than the rest of the existing 1st floor. The final obstacle that we had to accommodate into the remodel was the industrial-sized hood required because of the commercial grade stove the homeowners dreamed to have. There were a few obstacles with the hood, such as the piping for the exhaust being so large, that one of the ceiling joists had to be relocated in order to properly vent the hood. The biggest problem with the hood was the amount of air it drew out, as the manufacturer warned that in a residential application, it would create a vacuum effect inside of the house, causing damage to any of the seals inside of the house. To alleviate this issue, we installed a fresh air vent pipe that automatically opens electrically whenever the hood is turned on, giving the homeowners the practicality of a regular residential oven hood.
Overall, the homeowners could not believe the final result, of their newly remodeled kitchen. They were ecstatic to see how much bigger the kitchen turned out to be, as result of reworking the ceiling and utilizing the given space better. They loved the custom bench style seating for their family and all the storage was a bonus. As we finished up the job and talked about their new space, the thing they were most excited for was to begin cooking meals for their local homeless shelter again, giving the new kitchen a deeper meaning than just a dramatic transformation.